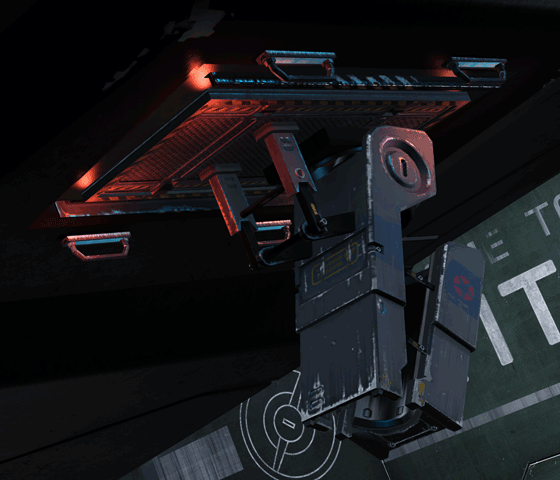 Mine launchers drop mines which will detonate when any hostile ships enter proximity. Multiple mines can quickly destroy small and medium sized ships, and cause severe damage to large ones. Damage is explosive (AoE) so can cause damage to ones’ own ship, and is much more effective against hull than shields.

Mine launchers are available only for class 1 and class 2 hardpoints. The mines are identical, but the class 2 launcher can drop 3 mines before having to reload rather than just one.

Mines also have a 1 second arming time during which they deal very low damage and apply no experimental effects.

The following special effects can also be applied:

Mines do not move of their own power after being deployed. Although the classical use for mines is to drop them in front of pursuers, it is of course possible to use them in a dogfight more offensively by tempting an overconfident opponent onto them. Cleverly used, they can be highly effective. Poorly deployed, then they will do nothing. They do not detonate in the proximity of non-hostile ships, but can still damage non-hostiles (and the pilot’s own ship) within their blast radius, so care is advised in crowded battle zones.

An active Point Defence Turret will automatically target and attempt to destroy any mines within range. They can also be targeted and shot at by ordinary hardpoint weapons, but their small size may make them rather difficult to hit.

Mines can be modified, and particularly noteworthy is the Reverberating Cascade experimental effect. Used with skill, a few mines can destroy any ship’s shield generator and render the most impenetrable shields useless in a moment – always a nasty shock for a pilot whose A-rated, highly modified Federal Corvette has just been crippled and left defenceless by an Adder.